A long-standing symbol of success and power, the cigar has enjoyed a real surge in popularity in recent years.

Whether it’s the slim and sexy cigarillo or the luxurious Cuban, cigars can be enjoyed by men and women alike, without breaking the bank or causing the same health problems as cigarettes.

A great way to relax and wind down, a good cigar can make you feel like a film star. Don’t believe us? Take a look at some of these celebrities who are well known for enjoying a puff or two on their favourite cigar.

The singer that transcends the gap between country and rock is the bad boy that everybody loves. Despite partying too hard and never being seen without his Stetson – and usually leather trousers too – Kid Rock has a class and style which is hard to match.

However, although he’s not averse to a few drinks here and there, one of his biggest loves is his cigar. So much so that he’s publicly broken anti-smoking laws to light up whilst attending concerts although opinion is divided over his favourite brand.

Ciara biting on a cigar

A modern Texan beauty, Ciara is an award-winning song-writer, singer and actress having notched up no less than eight top ten Billboard hits, and received 3 MOBO Awards and a Grammy.

The sultry songstress has a style all of her own and she’s not scared to experiment with more masculine concepts to highlight her femininity. Some might even say that Ciara has never looked sexier than when she’s chomping on a big Cuban Corona.

A successful golfer for more than 30 years, Miguel Jimenez strikes an iconic figure whilst out on the greens. Whilst he insists he never smokes during an ‘official round’, Jimenez can regularly be seen lighting up after finishing a hole and before signing his score card.

A devoted lover of the cigar, Jimenez has a particular fondness for the Cohiba Behike although any Cuban is likely to meet with his approval. Describing them as having a ‘spiciness and sweetness’ not found in any other type of cigar, the eccentric golfer enjoys around four or five every day.

The woman credited with making stripping seem classy, Dita von Teese is one of the most beautiful modern sex symbols around today.

Seen as a sign of a powerful woman yet one which retains an element of femininity and grace, cigar smoking scores a hit with many celebrity women.

One of the most famous rappers around, Snoop Dogg is renowned for his love of lighting up a cigar during a performance, usually one of the long and slim variety.

By his own admission, Snoop has sampled many of the world’s cigars, trying different flavour combinations from all over the globe.

In fact, Snoop loves the cigar so much that he launched his own budget brand during a festival. Available in many different flavours including sweet and white grape, Snoop says the picked the cigars to launch under his own brand because of their high quality and flavour combinations. 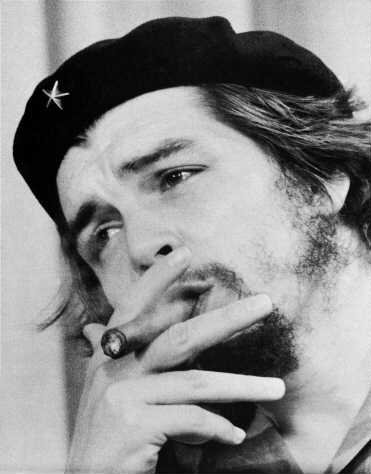 Despite being dead for more than 40 years, the Argentinian revolutionary and rebel leader, Che Guevara remains one of the most iconic figures even today.

Synonymous with an underground mentality and a figurehead for rebellion, el Che (as he was often known) was renowned for his love of good cigars and his recommendations have spawned a new generation of Cuban smokers. Indeed, Che’s influence was so great that his declaration about the quality of the Cohiba led to an explosion in demand for the premium cigar which has never abated to this day.

The former Baywatch star, who is also a trained dancer, as well as a model, actress and singer, has a body which has been worshipped in many countries around the globe, particularly following some raunchy Playboy shoots.

However, the celebrity is often pictured with a cigar in her mouth and certainly appears to be the real deal when it comes to lighting up. She recently admitted that when she was first seen with a cigar, it was purely because she thought women looked good holding one but after trying it at a party now appears to be a convert. Ms Electra has suggested that when she’s in her twilight years, sitting out on the porch in a rocker and smoking a big fat cigar would be a great way to while away the hours but in the meantime, she’s certain to continue to be spotted on the party scene for some time to come, complete with her Cuban smoke.

The above five celebrities are just a tiny proportion of those who are regularly seen out and about sporting a cigar. Others include Tara Reid, Demi Moore, Leonardo di Caprio, Michael Jordan, John Travolta and Heidi Klum to name but a few. Cigar smoking is becoming more and more popular as a way to relax and treat yourself so the question should be not whether you should enjoy one, but what’s in your humidor?