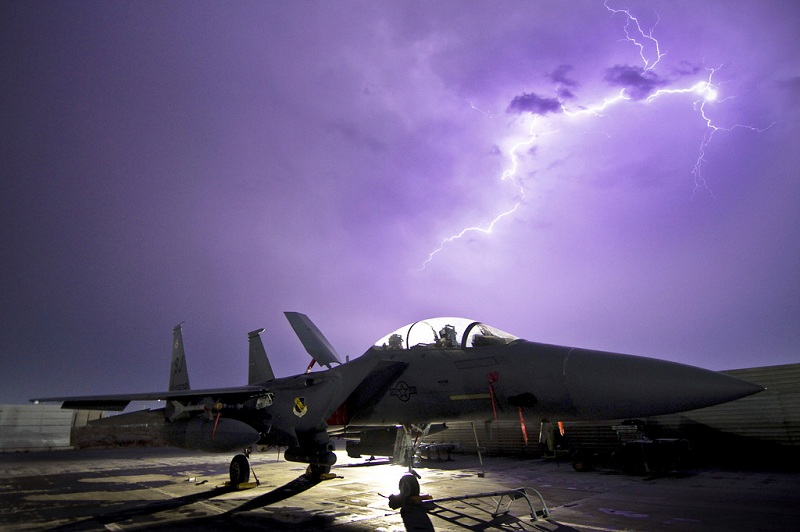 Like many official U.S. Departments, the United States Air Force has an active Flickr Account where they post images for the press and public’s viewing pleasure. With a library of 4,600+ photographs, there’s some really interesting shots published. Below you will find a small collection of images curated from about 50 of their 275 albums. Follow-up posts to come 🙂 Enjoy!

The U.S. Air Force F-16 Thunderbirds demonstration team performs aerial stunts at the “Legacy of Liberty” open house and air show at Holloman Air Force Base, N.M., Oct. 8, 2011. The team’s primary mission is to exhibit the capabilities of modern warfighting aircraft and to demonstrate the high degree of skill maintained by Air Force members serving in a variety of career specialties. (U.S. Air Force photo by Senior Airman DeAndre Curtiss)

U.S. Air Force F-16 Fighting Falcon fighter aircraft from both the 8th and 419th Fighter Wings demonstrate an “elephant walk” formation as they taxi down a runway during an exercise Dec. 2, 2011, at Kunsan Air Base, South Korea. The exercise showcased Kunsan aircrews’ capability to quickly and safely prepare an aircraft for a wartime mission. (U.S. Air Force photo by Staff Sgt. Rasheen Douglas)

The U.S. Air Force Thunderbirds execute a maneuver while visitors watch from Falcon Stadium after the graduation ceremonies of the Class of 2009. This was the 51st graduating class, and consisted of 1,046 newly commissioned 2nd Lieutenants (US Air Force photo by Dennis Rogers)

U.S. Air Force Airmen look out the back of a U.S. Air Force C-130 Hercules cargo aircraft during Operation Christmas Drop (OCD), Dec. 12, 2011. The island of Fais is located within the Yap state of the Micronesian islands and is one of the more than 50 islands that will receive care packages this holiday season as part of OCD. (U.S. Air Force photo by Senior Airman Carlin Leslie)

A U.S. Air Force A-10 Thunderbolt II ground-attack aircraft is refueled over southern Afghanistan Aug. 18, 2011. The most prominent feature of the A-10 is the 30 mm GAU-8/A Avenger Gatling-gun cannon. This weapon is capable of firing 3,900 rounds a minute and can defeat an array of ground targets, including tanks. (U.S. Air Force photo by Master Sgt. Jeffrey Allen)

A U.S. Air Force A-10 Thunderbolt II ground attack aircraft waits to refuel Aug. 18, 2011 over southern Afghanistan. The most prominent feature of the A-10 Thunderbolt II is the 30-millimeter GAU-8/A Avenger Gatling-gun cannon. Both the A-10 and GAU-8 entered service in 1977, and the gun accounts for 16 percent of the aircraft’s weight. (U.S. Air Force photo by Master Sgt. Jeffrey Allen)

1960s – The F-111 Aardvark was a medium-range interdictor and tactical strike aircraft that also filled the roles of strategic bomber, reconnaissance, and electronic warfare in its various versions. USAF F-111 variants were retired in the 1990s with the F-111Fs retired in 1996 and EF-111s retired in 1998. (U.S. Air Force archive photo)